My writing has been a mostly private passion these past weeks. Just God and I. Pouring out my praise, crying out my complaints to Him, and then listening for His response, which usually sounded something like, “This too shall pass”.

Now I am trudging out of the valley with new battle scars and strengthened spiritual muscles. My vision is clearer, heart humbled, and newborn fawn legs remembering how to walk again. Helping my kids (ages 2 and 11 months old) battle the flu for nine days was not easy. Especially not as I endured my own draining, cold sickness. By day five I had finally thrown in the towel on my hopeful outlook and laid on the ground crying in defeat. I didn’t even have the strength to try to have hope. I was expecting hope to be a feeling, and I just wasn’t feeling it anymore. It took me 2 hours of laying on the ground in physical pain and spiritual desperation to really learn what hope is.

That morning of day five my dear friend, Katelyn, texted me and told me to try singing out to the Lord to get healing. Something about her text made me mad. Probably because a part of me was throwing a pity party and Katelyn was wanting me to trade my self-pity for praise. I thought she was crazy. But then as I laid there on the floor and realized nothing was changing (if anything the situation was getting worse because mommy lost her hope), I decided to open my mouth and sing out to the Lord. As my scratchy, painful and completely out-of-tune voice sang the words, “Whatever has come, whatever will be I’m held by the One who’s Name is Perfect Peace” a stirring began within me.

I sang it again.

I started to feel it that time.

The peace of God, like a wave washing over me slowly at first, and then- whoosh – a tidal wave. I was swept under and into the Lord’s current. An infilling of peace provided the perspective to see/taste/touch/feel the hope. It was like God put His hands on either side of my face and said, “Look me in the eyes”. As I stared with silver lined eyes, I could see the endless promise land of my hope fulfilled in the reflection of His eyes. See I think that hope is not an emotional feeling. I think hope is an action. Hope is an arrow soaring through the sky until it meets its target. We can only have hope, we can only be hopeful if we continuously see what we’re hoping for.  The moment we lose sight on that which is hoped for, the moment we lose our hope.

“Hope deferred makes the heart sick,
but a longing fulfilled is a tree of life.” (Proverbs 13:12 NIV)

I was trying to feel hope, I was trying to be hopeful but I could not see the end in sight. Seeing the light at the end of the tunnel gives us the hope to move forward. We have to fix/glue/stick our gaze on to the absolute truth that is Jesus Christ in order to walk out life with the action of hope. Hope is more than a mindset, it’s a way of living.

Here we are 48 hours post-fever and completely healed. Thank you Lord! Two lessons  were taken from this nine day illness:

“After him was Shamgar the son of Anath, who killed six hundred men of the Philistines with an ox goad; and he also delivered Israel.” (Judges 3:31 NKJV)

An ox goad is similar to a cattle prod, a big stick with a sharp spur on the end to get the animal to go where you direct it. This Shamgar, I don’t really know who he was or what he did for a living, but he managed to kill 600 Philistine men with a pointy stick! There could have even been some giants in that band of men. All I know from this one verse about the guy, is that Shamgar grabbed what he had, something not typically used as a weapon, and did what he had to do to get to the other side of his problem. We think we need shiny swords and golden shields, we think we have to muster up something fancy that looks good on the outside to others. But I’m here to tell you that all David had was a sling shot and some stones. All Shamgar had was a oxgoad. And there is something in your reach as well.

I don’t know what enemy you’re facing this week, but we all have something before us whether it be a trial, goal, dream, etc. If you feel like you don’t have what it takes to fight through it, look around. The Lord has given you weapons for your warfare and spiritual gifts to glorify Him with. Grab what you have and annihilate the task at hand! Not only did Shamgar save himself, but he delivered an entire nation from captivity. For me, it was singing during the storm. Ephesians 6 gives us the armor of God to battle spiritual warfare. 1 Corinthians 12 gives us a list of spiritual gifts imparted with in us to glorify God, build up ourselves, and build up His people. Build relationships with godly friends to uplift you and speak truth to you. Find your weapons, hone in on your gifts, and live out your hope. Get off of the ground and slay 600 enemies. Today is the day for victory, my friends! 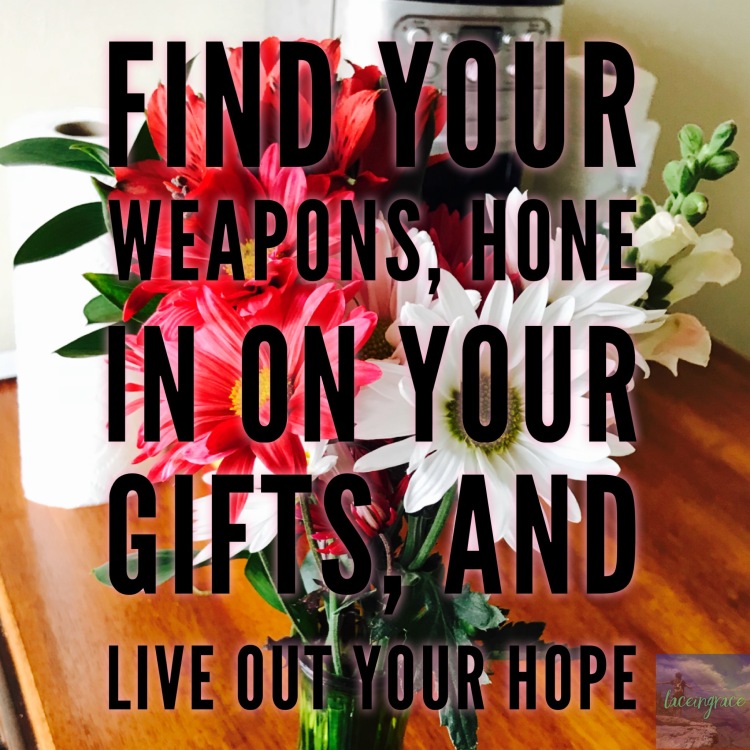 Check out the song quoted in this blog here!

Mom, wife, worshipper, writer, coffee lover, Jesus follower, book nerd, adventurer, +infinite other things. Walk with me as I journey through life with eyes fixed on the One who changed me. See my stumbles and see my victories, but above all see God’s grace working in and through my life. View more posts